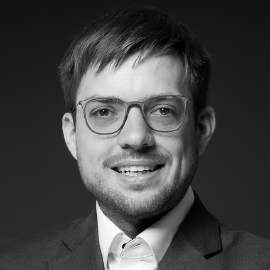 I am interested in decoding users' brain states to improve human–robot interaction. Specifically, I work on learning from non-invasive brain signals to predict user judgment and preferences. These predictions allow users to influence not only what the robot does but also how these actions are performed. 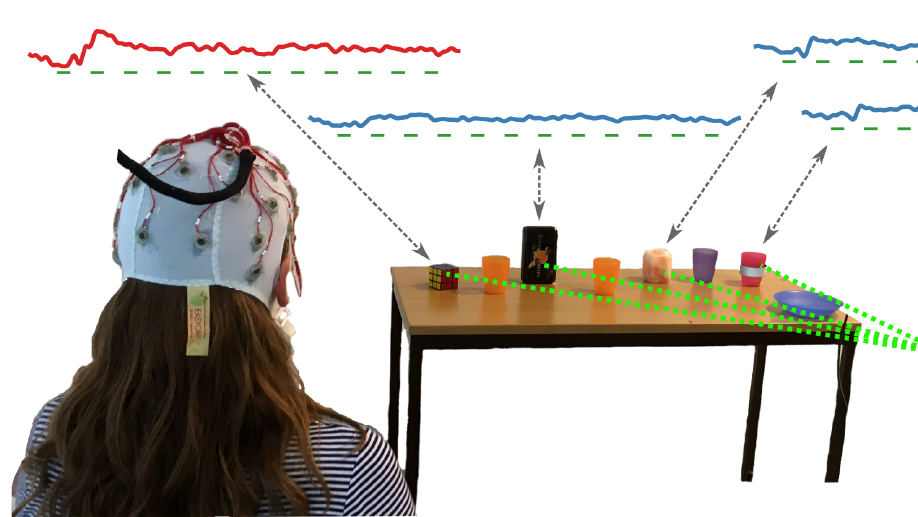 Brain signals represent a communication modality that can allow users of assistive robots to specify high-level goals, such as the object to fetch and deliver. In this paper, we consider a screen-free Brain-Computer Interface (BCI), where the robot highlights candidate objects in the environment using a laser pointer, and the user goal is decoded from the evoked responses in the electroencephalogram (EEG). Having the robot present stimuli in the environment allows for more direct commands than traditional BCIs that require the use of graphical user interfaces. Yet bypassing a screen entails less control over stimulus appearances. In realistic environments, this leads to heterogeneous brain responses for dissimilar objects— posing a challenge for reliable EEG classification. We model object instances as subclasses to train specialized classifiers in the Riemannian tangent space, each of which is regularized by incorporating data from other objects. In multiple experiments with a total of 19 healthy participants, we show that our approach not only increases classification performance but is also robust to both heterogeneous and homogeneous objects. While especially useful in the case of a screen-free BCI, our approach can naturally be applied to other experimental paradigms with potential subclass structure. 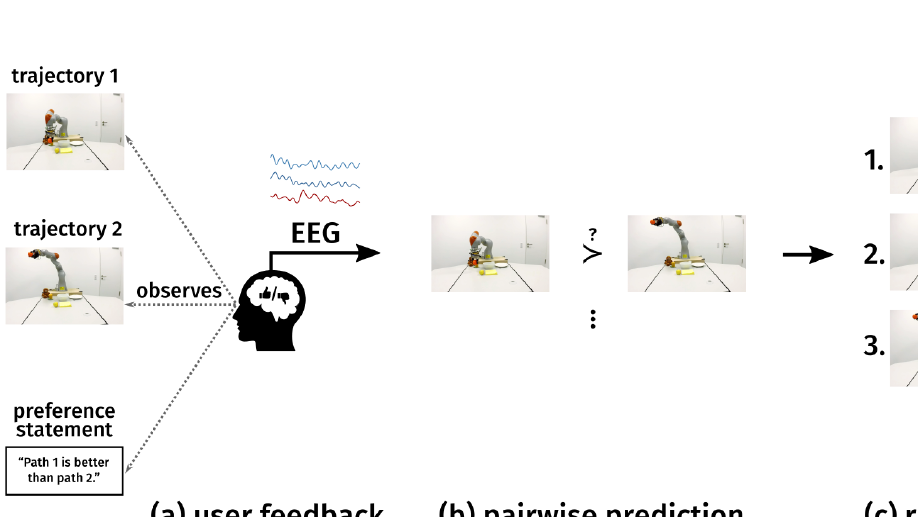 Robot motions in the presence of humans should not only be feasible and safe, but also conform to human preferences. This, however, requires user feedback on the robot’s behavior. In this work, we propose a novel approach to leverage the user’s brain signals as a feedback modality in order to decode the judgment of robot trajectories and rank them according to the user’s preferences. We show that brain signals measured using electroencephalography during observation of a robotic arm’s trajectory as well as in response to preference statements are informative regarding the user’s preference. Furthermore, we demonstrate that user feedback from brain signals can be used to reliably infer pairwise trajectory preferences as well as to retrieve the preferred observed trajectories of the user with a performance comparable to explicit behavioral feedback.

Robot motions in the presence of humans should not only be feasible and safe, but also conform to human preferences. This, however, …
Henrich Kolkhorst, Wolfram Burgard, Michael Tangermann
Preprint PDF